Look at what poseidon has became, a statue. Hydra must be stopped!

An entire continent is waiting to be discovered. Is it full of gold ?

Are these giants really strong titans? It remains to be seen

Calliope is a free to play mmorpg game available in 11 languages. We have a large team that provides support for each language and every day we strive to provide the best gaming experience. The purpose of the game is to accumulate experience and go through levels fighting monsters. By rising in level you can explore new worlds and get better equipment.

You can fly on the new flying mounts.
We have many players online and we have been around for a long time.
Our client is very well optimized.
We release updates every week.
Dungeons for any level.
We created unique systems.
Daily events.
Itemshop items can be obtained in-game.

Join our discord channel and chat with many other players.

Start items
When you enter for the first time you will receive the newbie equipment +9, a special mount, pet and an amulet that will help you fight better. You get teleport ring with unlimited teleportations and the Apprentice Chest. Important: The Apprentice Chest will give very important items at high level as coins voucher and reputation gems.

The attendant and pickup system

Skulls hunting
Ever since these monsters began to attack the world, humans have had to adapt and learn to defeat them by training from a very young age. The art of potions made us stronger and gave us an advantage against them. These monsters are led by powerful bosses, maybe if you bring their heads to the Alchemist he can find out what is behind their power.

To become stronger than them, the alchemy may be the answer.

It is believed that the Alchemist thinks he can infuse a little power from them into your body.

The skulls of the bosses
1. The heads drops in dungeons at the displayed bosses.
2. They do not drop if you entered directly from hydra.
3. To active a head slot you need to deliver the head to the Alchemist. Success rate is 75%.
4. Once activated the slot cannot be deactivated and is permanent.
5. When a slot is active it becomes colorful

Golden Skull
1. This skull can be obtained by pressing the button in the lower right corner. You must have all the skulls in your inventory and they will be taken from you when you press the button.
2. The skull offers all the bonuses given by the other heads, but bigger.
3. While the other heads are permanent, the power of this skull disappears after 30 days.

This system allows you to change your skills color using give different color combinations. This will work if your skills are at perfect level.

This costumes can be obtained for free in game from events, crafting and dungeons.

It makes part of the visible equipment, like the weapon and armor. The scarf is fitted in the costumes window, which can be opened via inventory. You can hide your scarf at anytime from costume page like you can do with all the other costumes.

To make a scarf you have to give to Theowahdan from map1 x200 fine cloth dropable at medium level bosses. The scarves have 3 "default" bonuses + 3 more that can randomly switch from changing at Theowahdan the bonuses. In order to obtain all 3 bonuses you have to move the scarf on theowahdan until it drops. Also to change them all without losing them you have a scarf switch. To evolve the scarves go to Seon Pyeong and move them on him. The maximum evolution is (Custom). Evolution of the scarf will increase the first 3 bonuses of the scarf, and the last 3 must be made to theowahdan by changing them. 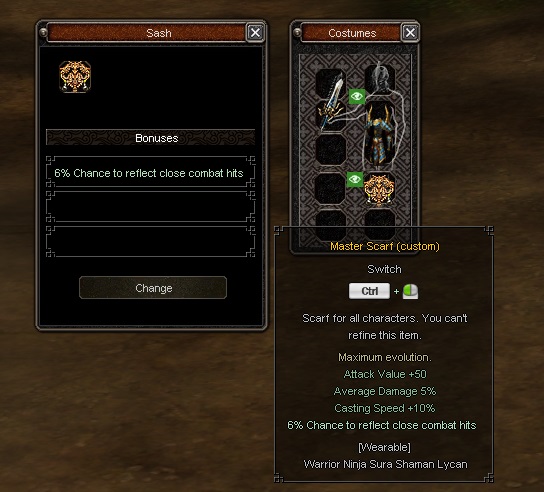 Ground or flying mounts. This animals are cheap to get and the best to have because they provide you the ability to go anywhere in no time.

You can obtain them from: Events, Dungeons and Crafting.

Shaman and the daily vote (pet)

It is a shaman pet that can be raised up to level 60. He can be called to you immediately anywhere and at level 60 he will have an bonus power of 45%.

Where can I get it?

Go to the first respawn location in city 1 at the "Starter" npc and buy the shaman.

Reputation merchant
Reputation merchant is a npc that is found in every city 1 of every kingdom. It offers for sale high value jewelry and rare items. Some objects are bought with points accumulated from bosses and destroyed stones.

All matter from this world contains magic, but not all can use the magic. It's just there, but without practical use. Blue and gold jewelry can find the unused magic inside items and use it to increase the status of the equipment.

Both blue and gold jewelry drop to all the monsters in the game. Because the items are rare, every weekend the drop rates are doubled.

There are other items that can be bought from this merchant:

Half-Humans potion (3 hours)
This potion will give you 10% more damage against half-humans for 3 hours. You can buy it with 100 destroyed stones.

Attack potion potion (3 hours)
This potion will give you +150 more attack points for 3 hours. You can buy it with 100 destroyed stones.

You can find your crime statistics page on the C page.

The Talismans are also called elemental talismans because they are formed of 6 kinds, covering the 6 basic elemental resistances such as fire, wind, earth, lightning, ice and darkness.

It has this name because when you make a shop to sell items, you don't transform into a shop anymore, it will appear next to you and even if you are offline the shop will remain open. From anywhere, you can retire, add items, close, open another shop and change it's name.

Search shop
Search shop page can be opened from minimap or with f12 key. It allows you to buy items from shops from anywhere no matter the map or channel. You can search items by their name, amount and quantity and also by category.

Now with just one press of ctrl+v all potions will be activated automatically.

Dungeon page allows you to see when you can enter again in the game's dungeons and allows you to also teleport directly to their entrance. You can open this page using f12 key or through minimap button.

Queen Slime Cave, specially designed for beginners to enter from level 40. Here you can farm gold bars and books that drops only for your skill type.

Infected Garden, for new players, but also for the high ones who have a farmer of at least lv.70. Here you can obtain the pvm accesories.

A story and a special mission for players who want the best equipment. Drops some special powerfull helmets. 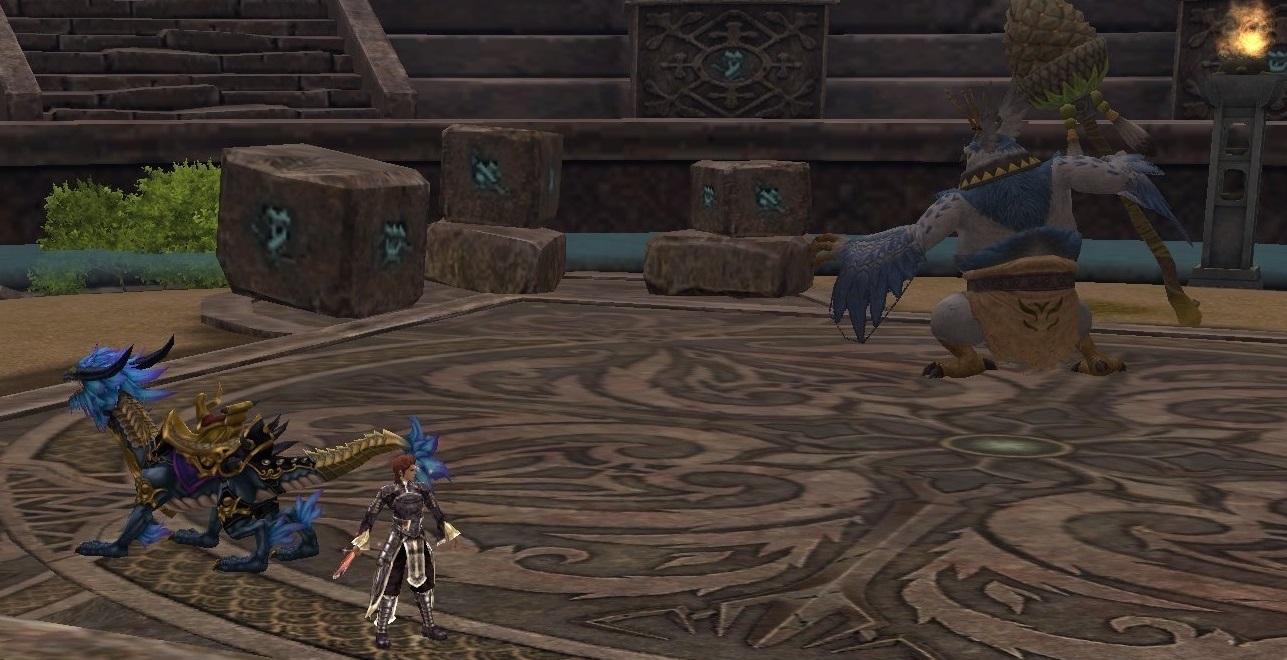 Just look how Hydra transformed Poseidon into a stone. Defeating Hydra you will be awarded by the other gods with pvp bonuses that will keep for hours. A perfect dungeon to prepare yourself for a PvP.

Killing hydra you receive:
Special bonuses for 3 hours.
Teleport points. With teleport points you can teleport to certain dungeons directly at bosses 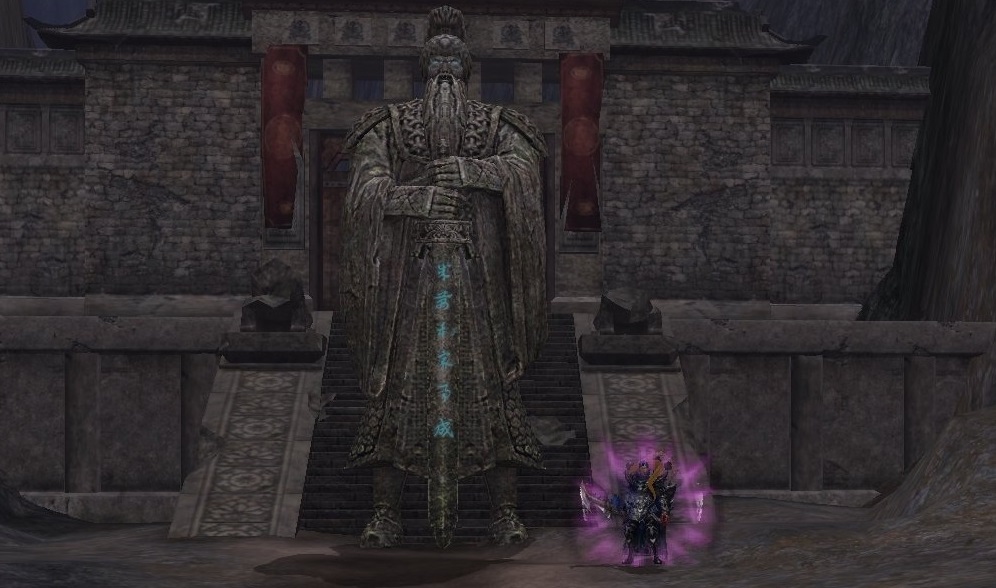 Zodiac Temple - Defeating the zodiac demon lord, you will obtain upgrade items for you to craft strong weapons and armors blessed by the power of the true zodiac gods.

Ganesha ruins - This is the perfect dungeon to exploit in order to build a the strongest pvm equipment. But ganesha does not have a weak spirit. It will not be easy to defeat him. 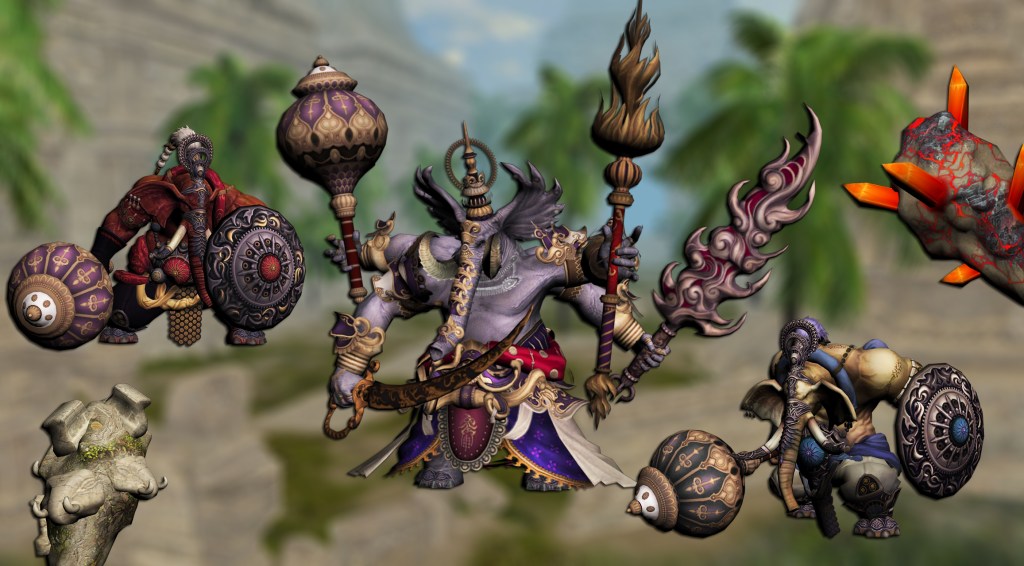 There is always an active event celebrating the seasons of the year. Summer, halloween, easter and winter events, all of them brings good awards and decorations specific to the season 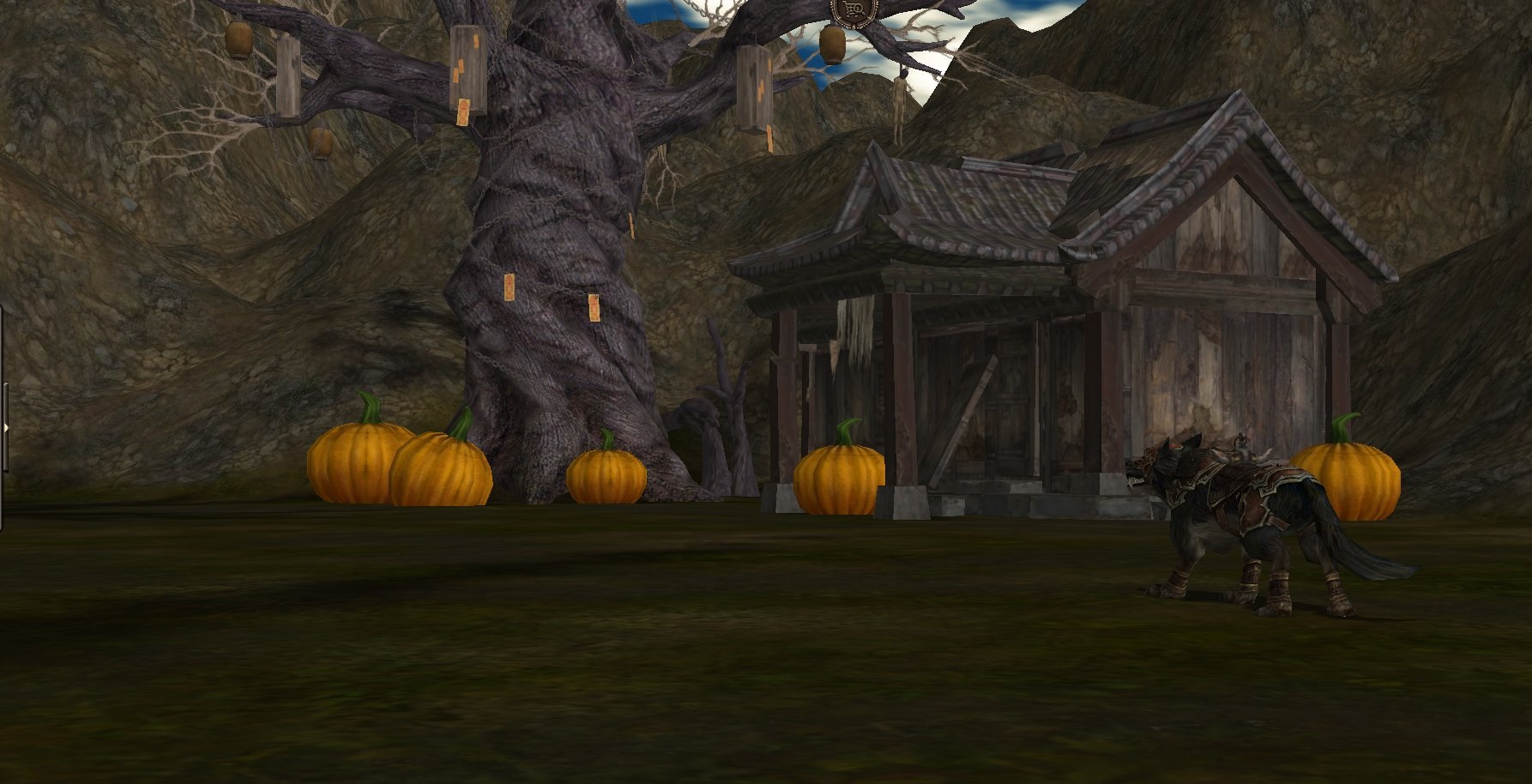 The War of Characters
A pvp event where you can make yang defeating players of +-10 levels. You can get a medal over your head with 1, 2 or 3 depending on how much you kill until the event it's finished. At over 90 killed players, you're awarded with coins. The event is completely automatic, and it also has time limits for those who you killed, check for not to beat yourself, life potions and mounts don't work, and when you die and get up you are always respawned at a random point from the map with fully loaded life.

Boss invasion
Every Thursday at this event a lot of different bosses are spawned automatically by the system. If you defeat one, another appears in the same place.

Golden Frogs
Every Friday you can enter this map to farm the tanaka ears that drops on these golden frogs. At Mr.Soon from map1 you can change them to yang.

The Pickup button, will automatically take the items from the ground for you. If you want to filter the drop, press esc key then Game options and down to the pickup filter you have to choose between books, stones, upgrade, equipment.

At Captain you can craft new permanent suits. Different items are required for crafting them and a fee of 50.000.000.000 yang. Captain is located in every kingdom.

Weapon skins
Weapon skins are the same as armor costumes. When you wear a weapon skin, it will be seen instead of the weapon, and it will also give you some bonuses.Most of them offer the following bonuses: 20 attack value and 5% strong against monsters.

They drop at many other bosses, but some of them are : Owl, Red Dragon, Nemere, Shax from demons tower 2, Zodiac 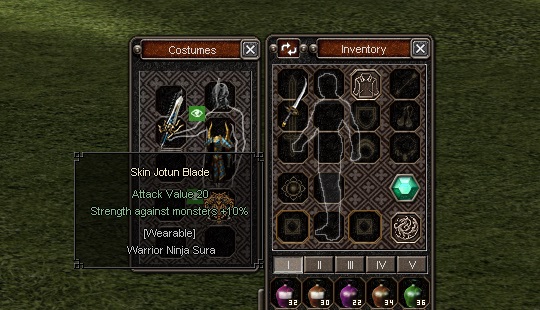 Special inventory and new slot for the F5-F8 keys

By pressing the U key you can open an inventory where all stones, books and upgrade items go. On the right you can see the new slot where you can put your skills, pet, mounts and other items you can use by clicking or using the F5-F8 keys. Pressing x you will hide the slot bar, but the keys will still work. 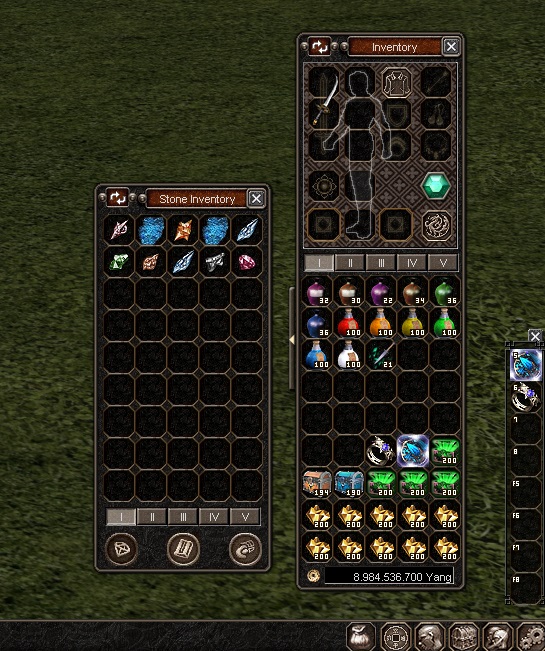 
Captain let you see the top damage of players. The ranking gets reseted every some weeks. 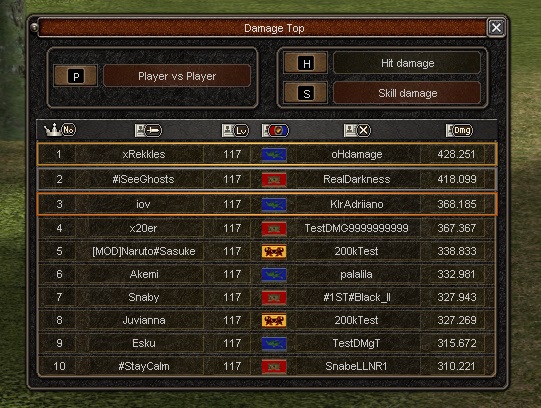 Reborn will only reset your level, and in return you will receive a rank next to name which you can hide if you want and also you receive the bonuses in the image. Skills and missions are not reseted. After the 3 levels of reborn you will no longer receive bonuses as reward, however you will be able to reset your level whenever you want if you pay a 50.000.000.000 yang fee and having a level of 117.

The image was resized to fit the page

We developed a strong anti-spam measure in order to block the thieves. You can play safe on our server. You also can save your data with f1-f8 keys and auto-login by pressing click on the buttons 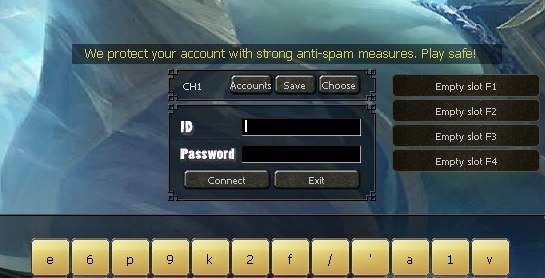 Ctrl+E - Teleport to the current event.

Ctrl+V - Use all potions in inventory

Preview
You can use ctrl key to preview items from everywhere like shops, crafting pages etc.

Colors in chat
You can write in chat with different colors using our simple color page.

Random players in friend list
From friends page you can see random players that have the same language as you. This will help every new players make new friends. Of course, you can disable this option from game options. The list will be hidden for you and you wont appear online for the others.

Search feature
Now you can search for your friends or guild members faster than ever before.

New slots
You dont have to keep your inventory open all the time now, you can simply attach the items you need on the new slots.


Safety measure
Small feature that helps players to escape if they get blocked in some objects.


For more details check our new wiki page. We add new data at every update we make